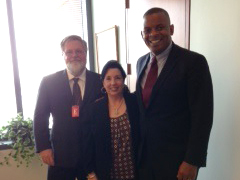 Jennifer Tierney, North Carolina Volunteer Coordinator for the Truck Safety Coalition (TSC), board member for Citizens for Reliable and Safe Highways (CRASH) and a member of the Federal Motor Carrier Safety Administration’s (FMCSA) Motor Carrier Safety Advisory Committee (MCSAC) stated, “We appreciate the Department of Transportation’s continued commitment to safety and encourage them to stay the course. Despite the congressionally mandated truck size and weight study being conducted by the DOT right now, we are seeing a perpetual push for truck weight increases. It is more important than ever that we act on improvements to truck safety now. Bigger, heavier trucks make every truck crash more dangerous, and truck safety issues even more vital.”  Tierney urged the Department to support retaining the 1995 legislated freeze on longer combination vehicles (LCVs) and the current federal size and weight limits and oppose any special interest exemptions to truck size and weight limits. 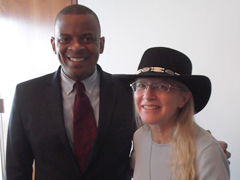 arianne Karth lost her daughters, AnnaLeah and Mary, in May of this year in an underride truck crash.  Karth asked that the Department issue a long-overdue higher standard for rear underride guards and for side guards on motor carriers in order to prevent more families from losing loved ones, stating that research has already proven that improved rear underride guards should be required.  “If it had been done sooner, I might not have been at this meeting today,” said Karth. 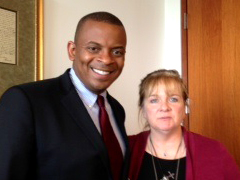 Jackie Novak, whose son Chuck, and Chuck’s girlfriend Theresa Seaver were killed in a truck crash in 2010 which claimed the lives of three others and injured several more, added, “After the crash that killed Chuck, we quickly learned that the trucking company’s insurance would not be able to cover all of the costs of those injured in the crash, and provide for the families of those killed. The requirements for insurance for motor carriers are so tremendously inadequate when compared to the capacity for damages caused by a truck crash. It’s unfathomable why minimum insurance levels have not been increased in over thirty years.  The Secretary of Transportation has the authority to adjust the minimum insurance levels and we implore him to exercise that authority. In fact, at our meeting with Senator Burr he also expressed his support of the Secretary increasing minimum insurance requirements.”

Jane Mathis, board member for Parents Against Tired Truckers and a member of the Federal Motor Carrier Safety Administration’s (FMCSA) Motor Carrier Safety Advisory Committee (MCSAC) concluded, “It’s been over a year since Congress approved the mandate for electronic logging devices (ELD’s) on all commercial vehicles, and every day we continue to wait for the rule, we miss an opportunity to save lives and prevent injuries. We appreciated the time Secretary Foxx spent with our group, and his assurance that within a short period of time we will see tangible progress on the truck safety issues we raised during the meeting.”