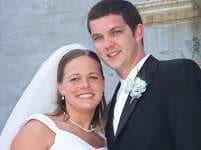 On March 25, 2004, David Mathis and his wife Mary Kathryn Mathis, were killed in a truck crash in Titusville, Florida, as they drove home from their honeymoon. They had only been married for five days. David and Mary Kathryn were stopped in traffic because of an earlier wreck on I-95 when a truck driver, who had fallen asleep behind the wheel, rear-ended their car. The impact of the crash spun them around and they became wedged under the side of the same truck. Their car then exploded.