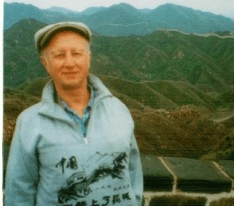 Bill Badger was killed in Georgia on December 23, 2004. He was on his way to the Atlanta airport from his home in Alabama intending to fly to New Jersey to spend time with family for the Christmas holiday so he wouldn’t be alone. Bill’s wife of more than 50 years had died unexpectedly in July. Bill was stuck in slowed traffic on Interstate 85 due to a prior accident and emergency responders blocking the right lane. The truck driver, who fell asleep at the wheel, sped through a construction zone at the closed truck weigh station and smashed into Bill’s car. The car’s airbag data showed it went from 14 mph to 65 mph upon impact. He was killed instantly. The truck driver stated that he had been driving all night to get to Atlanta by 7:00 a.m. so that he could be assigned to another truck that was headed to Florida. The driver had been enticed to make the long overnight drive in order to spend Christmas with his family in Florida. Beth was anticipating her dad’s call that he had landed at the Newark airport, but instead she got a call from the Troup County Coroner’s office. The Badger family spent their Christmas at Bill’s Alabama home without either parent. They wanted to do something to make sure other families never had to go through such a terrible event. Their thoughts became actions and several Badger family members volunteer as truck safety advocates. Bill’s daughter Dawn King is a board member of the Citizens for Reliable and Safe Highways Foundation (CRASH) and the current President of the Truck Safety Coalition.