My son Wyatt was 5 years old when he was killed by a box truck that was not equipped with AEB. He was such a gentle soul.  He found awe and wonder in what most people take for granted.  He could spend an hour watching an ant crawl across the floor and loved every kind of animal. Most of all, he was always happy, and he brought joy to everyone. He was 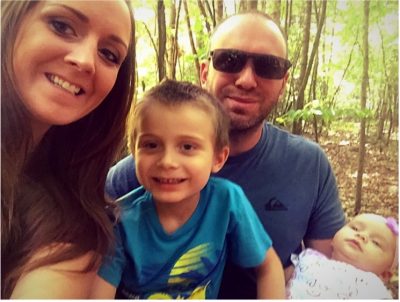 also a new big brother – I had just had my second child, Scarlett, 5 months before. On November 18, 2016, Wyatt was having a typical school day.  He woke up early to tell my husband, Aaron, that he loved him as Aaron was leaving for work.  Then later that morning, as Wyatt was preparing to leave for school, he decided that he wanted to take his stuffed Rudolf the reindeer to school with him. My last memory of Wyatt is strapping him into his carseat, putting Rudolf on his lap and kissing him goodbye. I had no idea that the goodbye was to be forever.

Earl Gray was a retired gentleman who volunteered to drive Wyatt to and from school, as there was not a bus that went to Wyatt’s school from our area. Earl had become Wyatt’s friend…and our friend.  His death in this crash was a huge loss to the community.

Friday afternoon, Earl and Wyatt had not arrived home yet. Aaron had taken off from work early to come home and play with Wyatt. We called the school and they confirmed that they had left. We called Earl and Earl’s contacts and no one could reach him. Then we heard that there had been a bad crash on the interstate, and Aaron drove out there to see if they were stuck in traffic. Aaron parked his car on an overpass and went down the line of stopped cars, looking for Earl and Wyatt. When he arrived at the front of the line of stopped traffic, one of the firemen told him that Earl and Wyatt were no longer with us. The scene was horrific. The box truck had forced Earl’s car into the rear of the semi in front of them and then the box truck smashed Earl’s car as it drove on top of it.  Neither Wyatt nor Earl had a chance against such a big truck bearing down on them. The rest of that day and the months that followed were a constant nightmare. We couldn’t even bear to return to our house, and we lived with my parents for the next month. Caring for our new baby was a constant reminder of what we had just lost, and everything became unbearable and overwhelming. 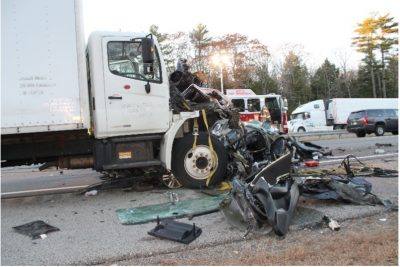 The facts of the crash kept invading my mind. How could such a thing happen? Don’t they bother to train or supervise truck drivers? My son and Earl were heading to my home, driving northbound behind a semi-truck on Interstate 95 near Wells, Maine, when they had to slow and stop due to heavy traffic. Behind them a truck driver in a Class 6 “medium duty” truck failed to stop and instead slammed into and drove on top of Earl’s car.  We later learned that the driver of the box truck that killed my son had lied on his DOT medical exam. The truck driver had diabetes and was insulin-dependent – something that should have excluded him from being able to keep his Commercial Driver’s License. My mind kept thinking… a stranger who was not qualified for his job and should never have been behind the wheel of that truck killed my son with a truck. Wasn’t anyone in the government doing anything to protect the public from crashes like this? Who was responsible for failing in their oversight of truckers and allowing crashes like this to happen?

I am here today for my son Wyatt. It has been almost 5 years since Wyatt was senselessly killed, and I learned last week that the people we rely on to protect us are once again failing miserably in their job. We now have the technology to make sure that, if drivers fail to apply brakes when they should, a truck can apply them automatically with “Automatic Emergency Braking,” (or AEB), but that the current proposed infrastructure bill doesn’t require all trucks to have that safety device. Special trucking interests don’t want to spend the money to put it on all trucks even though the cost of this technology has been estimated at a non-retail cost of less than $300! That means that trucks like the one that killed Wyatt, and the millions of delivery trucks that are driving, not just on the interstates, but driving in our cities and towns and in our subdivisions and residential areas to make deliveries will not have to adopt this proven and reliable life-saving technology.  AEB works to prevent and to mitigate a wide range of crashes, but, because trucking special interests don’t want to spend $300 per truck, the industry fought to keep the AEB requirement from extending to all of these trucks.  My daughter Scarlett will never really have her brother Wyatt.  But she knows who he is.  We keep a photo of Wyatt and Earl on our hutch and each night, as we turn off the hutch light, we tell Wyatt we love him and miss him. Even though Scarlett was only an infant when she lost her brother, she misses him very much. Scarlett turned 5 years old today, she cries sometimes and wishes that she could have her brother with her. It breaks my heart when she asks if she can go to heaven to play with him. She tells me that if Wyatt were here, she wouldn’t be scared of the dark because he would be here to protect her.

This November it will be 5 years since Wyatt was killed and my husband and I still think about him every day, and multiple times throughout the day. We will never stop thinking of the senselessness of that Friday afternoon – that truck driver, that box truck. Wyatt’s crash proves that these vehicles are just as deadly as the larger trucks, and they are moving by the many thousands through our streets and neighborhoods at all times of the day. I didn’t think my heart could break any more, but this callous piece of legislation is insult on top of deep grief. Please do whatever is necessary to change the bill to require that all new trucks must be equipped with life-saving automatic emergency braking to protect us from all trucks, not just some. It is unfathomable to me that this is even a question. The truth is, AEB can minimize so much loss and protect so many lives.  For other families, for Wyatt, for me, and for all drivers and passengers on the road…. please understand why it is so important that all trucks must be required to have AEB.

I came here today to tell Wyatt’s tragic story in hopes that each of you will remember Wyatt. Please think of him, his smile, and his innocence that was taken from this world when decisions like this need to be made. I hope Wyatt’s story will help save the lives of others in the future.