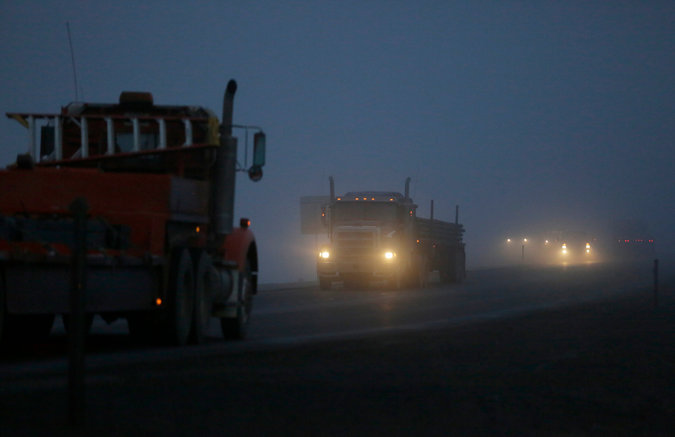 From the New York Times:

The trucking industry is again pushing Congress to allow bigger and heavier trucks with overworked drivers behind the wheel onto the country’s roads.

Republican lawmakers have attached a long industry wish list to an appropriations bill that will be voted on by the House in the coming weeks. It includes provisions that would allow trucks to carry longer trailers across the country, make it harder for the Department of Transportation to require drivers get more rest before they hit the road and forbid the department from raising the minimum insurance it requires trucks and buses to carry. The insurance levels have been in effect since 1985.

Trucking companies seem to have been emboldened by their success last year in getting Congress to temporarily suspend parts of a Transportation Department regulation meant to give truck drivers at least 34 hours of rest. That rule was meant to ensure that truck drivers got at least two consecutive nights of rest after working 60 hours in seven consecutive days or 70 hours in eight days. The industry had complained — wrongly in our view — that the rule, which went into effect in July 2013, “exacerbates congestion” and could make highways less safe by forcing more truck drivers onto the roads during morning rush hours.